Hello, I bought on Ebay a fake golden C64. Here it is: As you can see, two keys were broken, I fixed them. Then I removed the paint using chemical products, and I did a 'retrobright' on the whole C64 which was a lot yellowed. Here is the result: I guess it is a 'C64 Aldi' on which the top has been replaced by a 'C64 G' one. 'Aldi' and 'G' Revisions. By 1987, The Commodore 64 was still selling strong, but competition was fierce, and the C64 was no longer top-of-the-line. To keep the C64 in production, Commodore redesigned the motherboard and chipset for a less expensive production process by consolodating more of the chips into a fewer number, as well as operating at lower voltages. The C64 Aldi was made in USA, however was only sold in Germany as a game machine through only one distribution channel, a supermarket chain called Aldi, hence the name given by the German 64’er magazine. In 1989, the C-64 Aldi would be replaced by the grey C-64G which would use the same motherboard.

Commodore came into the computer business when they got their hands on a chap called Chuck Peddle. After leaving Motorola with a head filled with ideas about a microcomputer that the man in the street could afford he designed the 6502 processor which would become the basis of the Commodore 'Revolution'. The processor would actually become so popular that it even found its place in newly released games consoles as late as the beginning of 1990s. Considering the pace microprocessors are being upgraded these days its a miracle that this 1 MHz CPU was 'good enough' for over a decade. 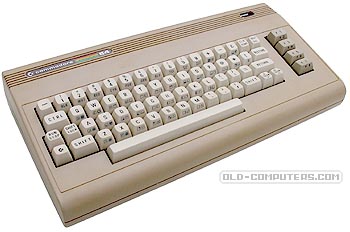 Peddle designed the KIM board-computer and with Jack Tramiels blessing got to make the PET 2001 - a science fiction inspired masterpiece with 4 or 8 kilobyte memory in its first release in 1977. A number of PETs came out during this time, and Chuck was later busy on the next generation, the TOI computer that never came out. Robert Yannes came on the team and designed a product under the codename Vixen which would eventually turn in to the VIC20, Commodores next big hit. By this time Chuck wanted Commodore to go serious business, something Jack wasnt quite agreeing on, so unfortunately Commodore lost one of their most important technitians.

Alongside this Commodore Japan would design the Ultimax or MAX machine which was also dubbed the VC-10 in USA. It was in some ways better than the VIC20 but lacked the expandability and had some quirks in its design, so it was never really sold outside Japan.

The VIC20 would become a very popular computer and was still selling well when Commodore introduced the C64. Sporting a better VIC chip (designed by Al Charpentier and Charles Winterble) and the famed SID sound chip (designed by Yannes). Robert Russels was also an important person in getting the software in there making both the VIC20 and the C64 their 'friendly computer' mark. A lot of people dont know it, but good old Bill Gates and their Micro-Soft was where the basic came from, a rather good deal for Commodore.

Its something special about turning on a C64 and its ready. If you turn on your PC today its ready in around 1 minute or so after it has booted. Naturally you cant really compare their powers in any way, but somewhere along the line there I think we went wrong...

Well, Commodores success with the C64 cant be understated as being the micro-computer revolution. It practically brought computing into the millions of homes, a technology that might have been reserved for big businesses if it wasnt for Commodores push into the market. If you compare the competition they all had very expensive computers compared to Commodore, until later in the game when ZX Spectrum and those came along. Its truly a remarkable feat that new technology of this caliber was available for $150 or less (VIC20).

Commodores history continues with Jacks desire to compete with the small newcomers, something that resulted in products like C116, C16 and Plus4. All rather interesting products by themselves but missing some crucial components to make them a viable 'upgrade' from the C64. But Commodore also had the desire to come with an upgrade, so what better name than C128? Well, you got to pat Bil Herd's back and complement him on his try, but essentially the C128 became 3 computers in one... and not really a backward compatible C64 in the way people wanted. Besides, the technology in the world was soon catching up with Commodore and MOS Technologies creations, something that can be seen with the amazing work by the people who made the Amiga.

Its rather interesting that Commodore who spent their first years in the computing business being sued by Motorola for using their patented technology (Peddle was the patent imo) - and then later using a Motorola creation for their next product - the Amiga. The Amiga team created a custom chipset that made everything else look pale. With great graphics and sound, Jay Miner and his team had a goldmine except its not always easy to sell a product that isnt complete. Commodore snapped up Amiga in the nick of time really and although they were able to make some brilliant machines, the cash flow seriously hampered the marketing. Its rather sad really, as there is indication that money was available, but just going into the wrong pockets. The Amiga would undergo many revisions and enhancements and through its lifetime a hefty amount of products came out.

One can be confused buy the timeline of Commodores products, because its common to think that Amiga came way later than the C64. Actually the Amiga 1000 was announced in 1985 while the C64 was announced only 3 years before. The C64C was released in 1986, one year after... and as late as 1990 Commodore tried to release a C64 games console, the C64GS. Its amazing that even after superior technology products like the Amiga came out they were still trying to push the C64. This might be the direct result of Commodores terrible dealings with their enigneers which had to undergo a tremendous stress and get little reward from it (even ending up being sued after they left in many cases). Its no wonder that Commodore messed up their status as the biggest microcomputer company. To succeed in technology you got to have good engineers. And in my eyes Commodore is all about the select few people who made it all happen. Its truly a remarkable feat and I must congratulate them all. Its a sad we never saw the C65 or anything else from Commodore since they would have been a welcome addition to the platform competition along Microsoft PCs and Macintosh PCs.

One cannot speak about these machines without speaking about the people who used them, and what they used them for. Its clear that Commodores main market was normal households and the kids desire to play games. In essence a VIC20 is only a games console but with a keyboard and built in Basic. Its brilliantly simple yet a new thing for its time. And games there were, thousands of them. I think I have heard numbers of around 1000 releases for the VIC20 and 15000 releases for the Commodore 64. The Amiga is most probably in their thousands too although that computer was actually used for more business use than any of their previous machines.

The king is dead! Hail the king! It was fun while it lasted! :)