Don't Starve: Pocket Edition is the iOS 8+/Android 5.1+ game, containing the Reign of Giants DLC. Refunds for Don't Starve: Pocket Edition (Google Play Store) For most Google Play purchases, you will be able to contact Google Play Support for a refund within two hours of the purchase. Past the two hours, we are able to offer refunds in the following situations if you contact our live support team.

Survive the cold and hunger by collecting resources and crafting tools! Explore the biomes, fight some dragons and find a treasure chest! NOTE: Don't Starve requires iOS 8 and at least an iPhone 5, iPad 3, or iPad mini 2. Due to memory constraints, it will not run on older devices.

Do not Starve: Shipwrecked is the continuation of a great game for iOS, where you will help the protagonist survive in dangerous conditions. In this game, your hero will be on a tropical island, where his main task will be to survive. Explore unexplored territories, collect the items you need and build a shelter to protect yourself from dangerous monsters. In this game you can even build a fruit on which you will go out into the open ocean. In the game your hero is waiting for a lot of different dangers, a meeting with creepy monsters and deadly traps. Constantly watch the health, hunger and intellect of the hero and try to survive on this dangerous island.

It didn’t take long to confirm the rumors of an iOS version of Don’t Starve, and it didn’t take long after that for the game to pop up on the App Store. But pop up it did, and now you can play the stylish and brutal survival game on your iPad.

You start out in control of Wilson: a well-meaning inventor who gets in over his head and is tricked into creating a sort of inter-dimensional gateway that pulls him into another world. Now he’s trapped in a bizarre wilderness with nothing to show for it. What’s worse is he’ll probably die horribly if you can’t keep him sane, healthy, and (obviously) full. 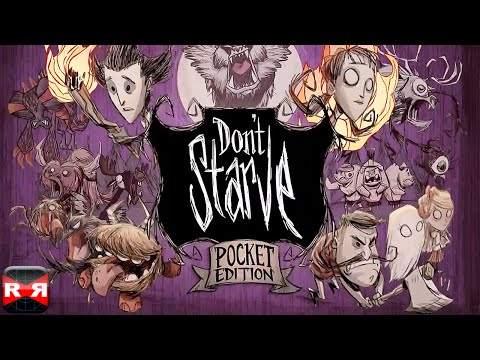 It’s not easy, but it’s fun. Especially if you enjoy games that really focus on survival and crafting. It’s also gorgeous, with graphics that have a distinctly hand-drawn look and call to mind the works of Edward Gorey. The way that characters speak with musical instead of actual voices is also a fantastic touch.

Don’t Starve: Pocket Edition is a full port of the PC version, which means the only real difference between the two is the interface. Here you’ll tap or tap and hold to move, while tapping on objects will interact. You can also tap and hold to perform continuous interactions such as mining stone or chopping down trees.

However, I think the most useful approach is to use one of the two buttons along the right side of the screen for attacking and interacting, respectively. For example, you can wander close to a tree and hold the interact button, then watch Wilson (or whoever else you might be playing as once you unlock more characters) start chopping. Once the tree is felled you can continue to hold the interact button and the various logs and sticks will be gathered up one by one. It’s a lot faster and easier than individually tapping on everything, that’s for sure.

A few of the inherent problems from the original version remain, since they’re byproducts of Don’t Starve’s design and not its platform. These aren’t major issues, but newcomers might not enjoy being tossed into a hostile world with practically zero guidance. Even those already familiar with it might find the randomized environments a little irritating at times (where are all those stupid rocks??).

Don’t Starve is one of my favorite survival games that I don’t play as often as I should because it’s so freaking hard, and Don’t Starve: Pocket Edition absolutely does it justice. In fact, I’m going to go out on a limb here and say that I actually think it’s better on the iPad because the tap interface allows players to interact a little faster and more directly. Really though, any version is fine because it’s a great game, but if you haven’t tried it yet this iPad port is a great place to start.