VEB Kombinat Robotron[needs IPA] (or simply Robotron) was the biggest East German electronics manufacturer. It was based in Dresden and employed 68,000 people (1989). It produced personal computers, SM EVMminicomputers, the ESERmainframe computers, several computer peripherals as well as home computers, radios and television sets. 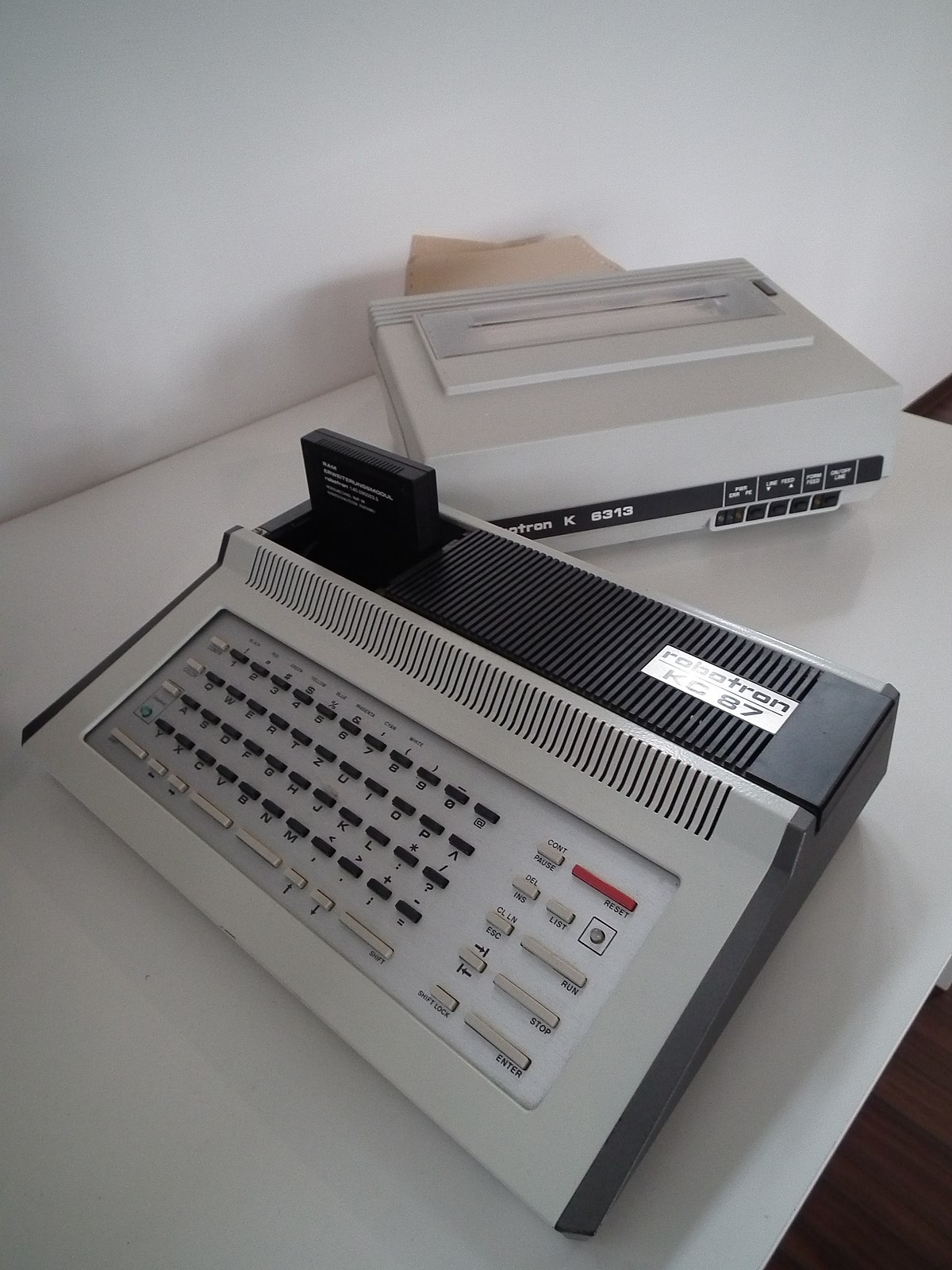 One of the 17,000 workers at the Kombinat Robotron in the German Democratic Republic in 1987 working during the weekend to produce typewriters
A worker at an assembly plant producing the ES 2655 mainframe.

On 30 June 1990 the Kombinat Robotron was liquidated and the divisions were converted into corporations. In the 1990s these companies were sold, e.g., to Siemens Nixdorf, or also liquidated.

Robotron Datenbank-Software GmbH is a company which emerged from one of the former divisions of Kombinat Robotron It was newly founded on 23 August 1990, just before German reunification.

Robotron printers were sold in Western Germany as 'Soemtron' or 'Präsident', and the West German branch of Commodore used some Robotron parts for their printers.

In East Germany, Epson printers were sold under the Robotron brand (but the technical description on the back side was with the 'Epson' logo).

Due to huge demand by industrial, educational as well as military institutions, KC 85 systems were virtually not available for sale to smaller customers.

There were two main lines in the KC 85 series, the KC 85/2 (project name HC 900) to /4 and the KC 85/1 (project name Z 9001) by Robotron, which was a different system (only the CPU and the name were the same, but later the format of saving the programs on tape cassettes and the BASIC were also made compatible). In 1989, VEB Mikroelektronik Mühlhausen came up with the KC compact, but due to the GDR collapse very few units got actually produced and sold and — being a CPC clone — it was a KC in name only; thus it is usually not counted among the KC family.

Unlike the Pravetz series 8 personal computers, manufactured in Bulgaria, which were equipped with decent dedicated displays, floppy discs and good quality keyboards, the entire series used a TV set for a monitor (by standard TV-HF via coaxial cable, FBAS (roughly composite video) or RGB) and a standard tape recorder as data storage. The keyboards were of low quality. The KC 85/1 used an integrated calculator-style keyboard with small 'keys' of hard plastics, while KC 85/2-4 used a separate keyboard driven by a remote control IC.

The KC 85/2 was the first computer made in Mühlhausen and had only font ROMs for capital letters, and no BASIC in ROM. Then, the KC 85/3 was introduced and this one had a BASIC interpreter in ROM, freeing the user from having to load the BASIC interpreter from a cassette every time. Both systems typically had 16 KB of RAM, but could be expanded with add-on modules. (The module sockets feature prominently on photos, as they occupy the upper 50% of the casing nearly completely.) The KC 85/4 had 64 KB of RAM (not counting the luxurious video ram of more than 40 KB) and better graphics capabilities.

All KC-series computers from Mühlhausen were able to display graphics at a resolution of 320×256 pixels. But the color possibilities were not that good (each 4×8-pixel cell had a single foreground (out of 16) and background color (out of 8, slightly darker than foreground equivalents). This limitation was brought down to 1×8 on the KC 85/4, which also featured a reasonable video RAM addressing mode and a special 4-color mode which could color every pixel independently. The colors were not paletted in any KC before the KC compact. There was no 'text mode', everything had to be painted; this and the awkward video RAM layout and suboptimal ROM code made the KC 85/2-3 rather slow at printing and scrolling (improved very much on KC 85/4). There were no blitters, and the video subsystem was hand-brewed (the KC compact used a 6845 as the CPC did of course). Sound and tape output was implemented by CTC channels driving flipflops. Memory bank-switching was common since the total address space was only 64 KB. When running Mühlhausen's BASIC, the video RAM (at 0x8000) was banked in only during video operations, thus the maximum BASIC free RAM was about 47 KB instead of 32 KB. The module extension system also used bank-switching and made it theoretically possible to extend to megabytes of RAM (even more modules could be used by adding expansion devices, yielding sort of a tower), however neither BASIC nor most of the applications were prepared to use this as free space.

The KC 87 was a better KC 85/1 with BASIC also in ROM. There was a color option (the 85/1 was only monochrome), but no real graphics apart from ROM pseudographic characters.

The wiring diagrams were openly available and there were also a lot of different (and often home-made) schemes and hardware parts. Various magazines published programs and hardware diagrams and also instructions on how to build them.