The Fairchild Channel F, short for 'Channel Fun', was the first programmable ROM cartridge–based video game console, and the first console to use a microprocessor.It was released by Fairchild Semiconductor in November 1976 across North America at a retail price of US$169.95 (equivalent to $763.58 in 2019). Saba Videoplay Saba Videoplay was the licensed Channel F-Version for the German market. It was released in late 1977 and was positively received by the press. A number of licensed versions were released in Europe, including the Luxor Video Entertainment System in Sweden, Adman Grandstand in the UK, and the Saba Videoplay, Nordmende Teleplay and ITT Tele-Match Processor, from Germany and also Dumont/Barco Videoplay - Italy and Belgium. Our version is the UK Adman Grandstand version. The Channel F was the first programmable video game system, having plug-in cartridges containing ROM and microprocessor code rather than dedicated circuits. 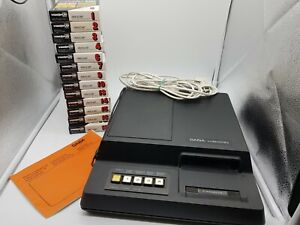 SABA Videoplay 20, (Videocart Nr. 20: Schach)
a ROM cartridgevideo chess game by the now defunct German electronics manufacturer SABA for the Fairchild Channel F and licensed video game consoles with F8 processor, such as the SABA Videoplay[2]. The chess cartridge was first released in 1979. The game, according to Torsten Othmer, an exclusive in-house development of SABA [3], today available as disassembled source code, is playable under the Multi Emulator Super System MESS[4]. The game has four difficulty levels, where it turns in a matter of seconds in the easiest level until up to 50 minutes in the highest difficulty.To allow the player to watch something else on the TV while the system is busy, the game cart indicates its 'thinking' state with a led[5].