Wayne wanted his tombstone to read, Feo, Fuerte y Formal (Ugly, Strong and Dignified). He was a handsome, weathered man when I met him in the 1960s and '70s, but not above a certain understandable vanity. Roo­ster might be an ornery gunslinger with an eye patch, but Wayne played him wearing a hairpiece and a corset. Jeff Bridges occupies the character like a homeless squatter. I found myself wondering how young Mattie Ross (Hailee Steinfeld) could endure his body odor.

Bridges' interpretation is no doubt closer to the reality of a lawman in those years of the West. How savory can a man be when he lives in saloons and on horseback? Not all riders on the range carried a change of clothes. Of course he's a lawman with an office and a room somewhere in town, but for much of the movie, he is on a quest through inauspicious territory to find the man who murdered Mattie's father.

As told in the novel, Mattie is a plucky young teen with a gaze as level as her hat brim. She hires Marshal Cogburn to track down that villain Tom Chaney (Josh Brolin). She means to kill him for “what he done.” If Bridges comfortably wears the Duke's shoes, Hailee Steinfeld is more effective than Kim Darby in the earlier film, and she was pretty darn good. Steinfeld was 13 when she made the film, close to the right age. Darby was a little over 20. The story hinges on the steely resolve of a girl who has been raised in the eye-for-an eye Old West, seen some bad sights and picked up her values from the kind of old man who can go and get hisself shot. 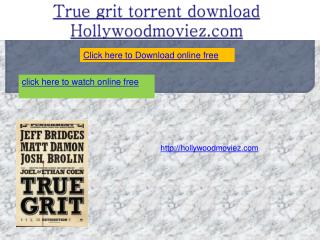 What strikes me is that I'm describing the story and the film as if it were simply, if admirably, a good Western. That's a surprise to me, because this is a film by the Coen Brothers, and this is the first straight genre exercise in their career. It's a loving one. Their craftsmanship is a wonder. Their casting is always inspired and exact. The cinematography by Roger Deakins reminds us of the glory that was, and can still be, the Western.

But this isn't a Coen Brothers film in the sense that we usually use those words. It's not eccentric, quirky, wry or flaky. It's as if these two men, who have devised some of the most original films of our time, reached a point where they decided to coast on the sheer pleasure of good old straightforward artistry. This is like Iggy Pop singing “My Funny Valentine,” which he does very well. So let me praise it for what it is, a splendid Western. The Coens having demonstrated their mastery of many notes, including many not heard before, now show they can play in tune.